I can’t help myself… I can't keep away from the eggplant. So here’s two recipes in a row.

First, here’s my healthy(ish) eggplant parmigiana – what a lovely thing with a bit of grilled chicken or fish. And not overly cheesy greasy at all. Second, a fabulous Japanese way with eggplant that is simply divine. I’d consider buying eggplant out of season just to make this. Try it and tell me you don’t agree.

Eggplant parmigiana with spinach
This recipe ditches the frying that can be a part of this recipe, and adds another serve of veges. Win-win!
Serves 2-3 as a side dish.

First, make the sauce. Heat the olive oil over a medium heat in a pot, then gently cook the garlic and shallots for a couple of minutes. Add all other ingredients except water and seasoning. Bring to a simmer and cook gently for 8-10 minutes, adding water if you need it. Taste and season. Set aside.

Preheat the oven to 180C. Spray the eggplant slices with oil, and arrange them on an oven tray. Bake for about 5-6 minutes (keep an eye on them) then turn over. Cook for another 5-6 minutes, until golden and soft. Remove and set aside. Leave the oven on.

Cook spinach leaves in the microwave or a steamer for 1-2 minutes, until wilted.

Spoon 1/3 of the sauce into the bottom of a baking dish. Cover with eggplant slices. Sprinkle with parmesan. Add a layer of spinach leaves. Repeat the layering, ending with a thin layer of sauce. Dollop spoonfuls of cottage cheese at random over the top. (This is optional, really, but it does add a little something creamy and nice to the whole thing). Sprinkle over breadcrumbs, parsley and any remaining parmesan. Spray the top with oil.

Bake in the oven for about 20 minutes, until it is bubbling and cheese is golden on the top. Remove from the oven and let it sit for a few minutes before serving. 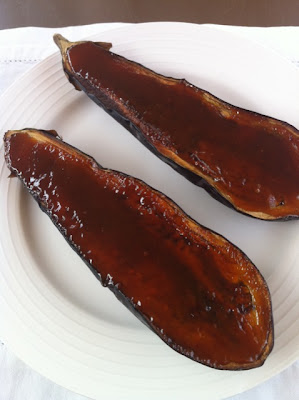 Miso Glazed Eggplant (nasu dengaku)
I first had this in Sydney at a very cool Japanese restaurant named Toko. Turns out it is a pretty common treatment for eggplant in Japanese cooking, and totally delicious. Different people seem to have different ways of doing the glaze; I’ve seen recipes using egg yolk which I assume would thicken it, but what I’ve done seems to give a result pretty similar to the Toko version. Please try it; and tell me how you like it!

Serves 2-4 as a side dish or part of a shared meal.

Preheat the oven to 200C. Bake the eggplant for 30 minutes or so, until soft and just starting to collapse a little (this would be even better done on the barbecue with the lid down, for a smoky flavour).

Turn oven to grill and return eggplant to the oven, cooking for about 2 minutes (keep an eye on it) until the glaze is golden, set and caramelised. Garnish with toasted sesame seeds if you like.

Howdy! I just want to give a huge thumbs up for the nice information you will have here on this post. I will be coming again to your weblog for more soon. Wedding Planning

I would just love how this recipe works especially for kids. :) healthy food for kids