It's been six years since I've lived in the city, and it is fair to say a lot has changed. It's also fair to say I have not been exactly up with the play on what's shaking in the Auckland restaurant scene. In the past six years we would have eaten out in the evening in Auckland perhaps a dozen times. As Catherine Bell put it the other night, "You have a lot of catching up to do".
What better time to start than with our celebratory night out on the town for the breaking of febfast. It was with decidedly mixed feelings that Sandy and I did this. We've both loved the feeling of not drinking - how much more energetic and clear-headed and just generally better we felt. On the other hand, we also like wine. A moderate evening was proposed. Two glasses only, I said, one a glass of bubbly to celebrate the fast breaking, and another glass of something with dinner.

We started at Soul Bar, since there are few nicer locations on a sunny summer evening. A glass of Moet et Chandon accompanied by haloumi & mint fritters with honey and almonds and some lovely little smoked salmon bruschette felt like a really good start. A toast, a sip, and the month of non-drinking was over. Onwards! 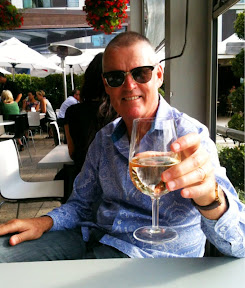 Our next stop was one of the hot new places - probably made hotter by the fact that it's only temporary. The Hamptons is a (how I hate this term) "pop-up" restaurant in the front courtyard of an office building in Shortland Street. It's been well-reviewed and talked up by the food media, so we thought we'd better check it out. I can see why it's only going to be there until May - the wind, even a slight one, whips and swirls through the buildings and once the sun was gone it was a wee bit chilly sitting in what is basically an outdoor room. But it's a lot of fun - set up like a New England beach club/lobster shed it's got a menu full of what you might expect to find in that part of the world. Crab and corn cakes, crayfish rolls, clams, etc, but with a little twist of elegance, as you might expect from the team that brought us Clooney. We enjoyed a piece of brisket on the bone served in a smoky barbecue sauce and a dish of spiced snapper with a salad of gorgeously sweet tiny heirloom tomatoes. Corn bread on the side was a bit sweet for me - we should have gone for the iceberg lettuce salad which in retrospect was probably a knockout. I'll be back for the crayfish rolls. 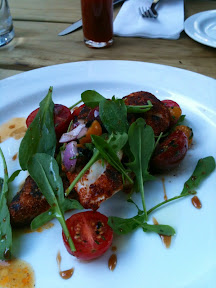 Moved on by the chill, more than anything else, we mooched down to Britomart, thinking we might find dessert somewhere before our ferry home. Unexpectedly this turned into the highlight of the evening. Ortolana, the brand new casual but magical restaurant tucked in between the stores at the Britomart Pavillions, was on my radar courtesy of a foodie friend but we'd decided not to go there for dinner. I instantly regretted that decision when we wandered in, and the fact that there were three other food writers inside was a tip that something great was going on here. So too was the warm and welcoming smile and incredibly gracious persona of host and co-owner Jackie Grant, who did not miss a beat when we said we only wanted dessert, even though there was clearly a growing queue of diners keen for full dinners. The orange creme brulee we shared was divine, accompanied by some of the most delicious grapes; Jackie told us they were montelpuciano, from the family's Kumeu farm. We loved that the house rose (Invivo) was only $7 a glass, too. The dishes I saw heading to other tables looked fresh, simple and full of flavour - I cannot wait to head back for proper dinner. 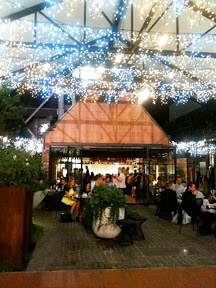 I confess to never having heard of the Hip Group before tonight, which Jackie and husband Scott Brown own and run. But it turns out they are some of the cleverest operators in Auckland when it comes to cafes, and this is their first evening venture. It's very soon to be followed by another, even more interesting one - a dessert restaurant, Milse, which opens this week. Jackie gave us an impromptu tour of Milse which is next door to Ortolana - it's a stunning space, seating only a handful of people, where you'll be able to get a 5-course dessert degustation, should you desire, or order a la carte, or take a little something sweet away. 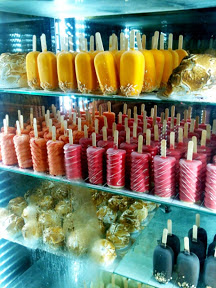 With its setting of twinkling fairy lights and manicured landscaping, Ortolana has a lovely feeling about it, and there is some seriously interesting but simple and seasonal going on with the food too, I think. I can see another night on the town (or maybe a lunch) on the cards for us very soon.

- Posted using BlogPress from my iPad