Are low-carb diets the way to go?

Here's my most recent column, published in the Sunday Star Times on 30th March 2014.


Compared to many areas of science, the science of nutrition, in the scheme of things, is only in its infancy. That’s probably why it often feels like scientists ‘change their minds’ all the time about what’s healthy and what’s not. Over the years some very plausible theories have been debunked, and new ones have been introduced. And there’s always a new theory around the corner.
One popular theory at the moment – although not new – is that eating a low carbohydrate diet is the key to good health. It’s the basis for the old Atkins diet, and the newly popular paleo-style diets, (although some paleo followers do include more carbs). It’s also the basis for a low-carb diet with a twist – the low carb, high fat diet, or LCHF diet, being proposed by a group of scientists as potentially the key to fighting type 2 diabetes and obesity. On this diet most (about 80%) of the energy comes from fat. That means eating eggs, fatty meat, fish, cream, coconut oil, butter, cheese and plenty of non-starchy veges, topped off with extra shots of oil and butter in your coffee.
Whether that appeals or not, it’s an interesting theory, and it will be interesting to see what comes from research on it, which is needed before we can really know if the theory is correct. At this stage it seems likely that a LCHF diet could work well for some people, although even advocates of the diet say it’s not for everyone, and the long-term effects are not yet known.
A common problem with many dietary theories, whether low-carb-high-fat, or - as has been recently proposed as another ‘best’ diet, high-carb, low-protein – is that it can be tricky to apply them to our real lives. Most of us don’t think of our food in terms of percentages – counting grams of carbs and fat. We think in terms of foods. If the only message we took from a theory like LCHF was ‘eat more fat’ and we didn’t change anything else in our diets – it could be disastrous.
However, there’s little doubt that poor-quality, refined carbohydrates are bad for our health. They’re especially bad when combined with saturated fat and salt - probably the worst case scenario, especially for people with insulin resistance or diabetes. But it’s worth remembering that all carbs are not equal. We could all probably improve our health by looking at the quality of the carbs we eat. Ditch the cakes and biscuits, white bread, white rice and mashed potato. Concentrate on true whole grains (not just things that say ‘wholegrain’ on the packet) and low-GI carbohydrates from legumes and colourful veges. Stick to fresh whole foods and it’s hard to go wrong, carbs or no carbs.
Personally I think I would find a very low-carb life difficult. As a food lover, the idea of a life where I could never eat crisply roasted potato or kumara, fresh sweetcorn, nutty quinoa, or a warm bowl of porridge on a cold morning – feels like a hard life.

Posted by Niki Bezzant at 3:41 PM No comments:

Should we ban sugary drinks?

Here's my most recent column from the Sunday Star Times.

Sugary drinks have been all over the news lately. At a two-day symposium recently held to discuss their impact, we saw calls for sugar-sweetened drinks to be taxed and even banned altogether.

Where these were once dismissed as fringe demands from the fun police, and all anyone in government had to do was whisper the phrase ‘nanny state’ to shut down any debate, the pressure is mounting for a serious conversation to be had.

The FIZZ group is made up of researchers and public health doctors who’ve banded together because they believe sugar-sweetened drinks are a major contributor to poor health in New Zealand. They’re advocating for the phasing out of sugary drinks from New Zealand, pointing out many studies linking the intake of sugary drinks with obesity, type 2 diabetes, rotten teeth, gout and other risk factors for cardiovascular disease and premature death. They say “the tide of evidence which implicates sugary drinks with these common diseases is so strong now that ending the sales of these products is justified”. They liken sugary drinks to tobacco, and say similar strategies should be used to phase them out, including raising prices through taxes, restricting advertising and sales, and having ‘sugary drink free’ workplaces and public institutions.

Whether or not you believe that sugary drinks are addictive in the way that tobacco is – and the evidence does not seem to be quite there yet – it is hard to argue that anyone needs sugary drinks in their life. I find it very hard to see the harm in taxing something that really does no good at all in our food supply, and probably does harm. Yes, life is about personal responsibility, and we all have to take ownership of our own health. But sometimes we also have to think of the greater good. For people who don’t have the awareness, education or knowledge about healthy eating, couldn’t regulation be a nudge in a better direction? Right now there is a group of people out there who are drinking enough sugary drinks to do them a lot of harm.

If you are someone who can’t do without a sweet drink in your day, now could be the time to try and wean yourself off the liquid sugar. You might start by switching to a sugar-free variety of your favourite drink. Whatever you think about alternative sweeteners, most experts agree these are a better option, even as an interim step. There are more and more drinks now available sweetened with the ‘natural’ sweetener, stevia, and these are also worth a try.

They won’t, however, take away the craving for a sweet taste. Only gradually reducing the sugar in your life will do that. It takes time, but it is do-able. Just as with salty tastes, our taste buds gradually adapt to less sweet tastes when we cut down. If you can get to a place where you choose a nutrient-dense piece of naturally sweet fruit instead of an energy-dense, nutrient poor sugary drink, you’ll definitely be on the right track.
Posted by Niki Bezzant at 8:22 PM No comments:

Can you drink your greens? 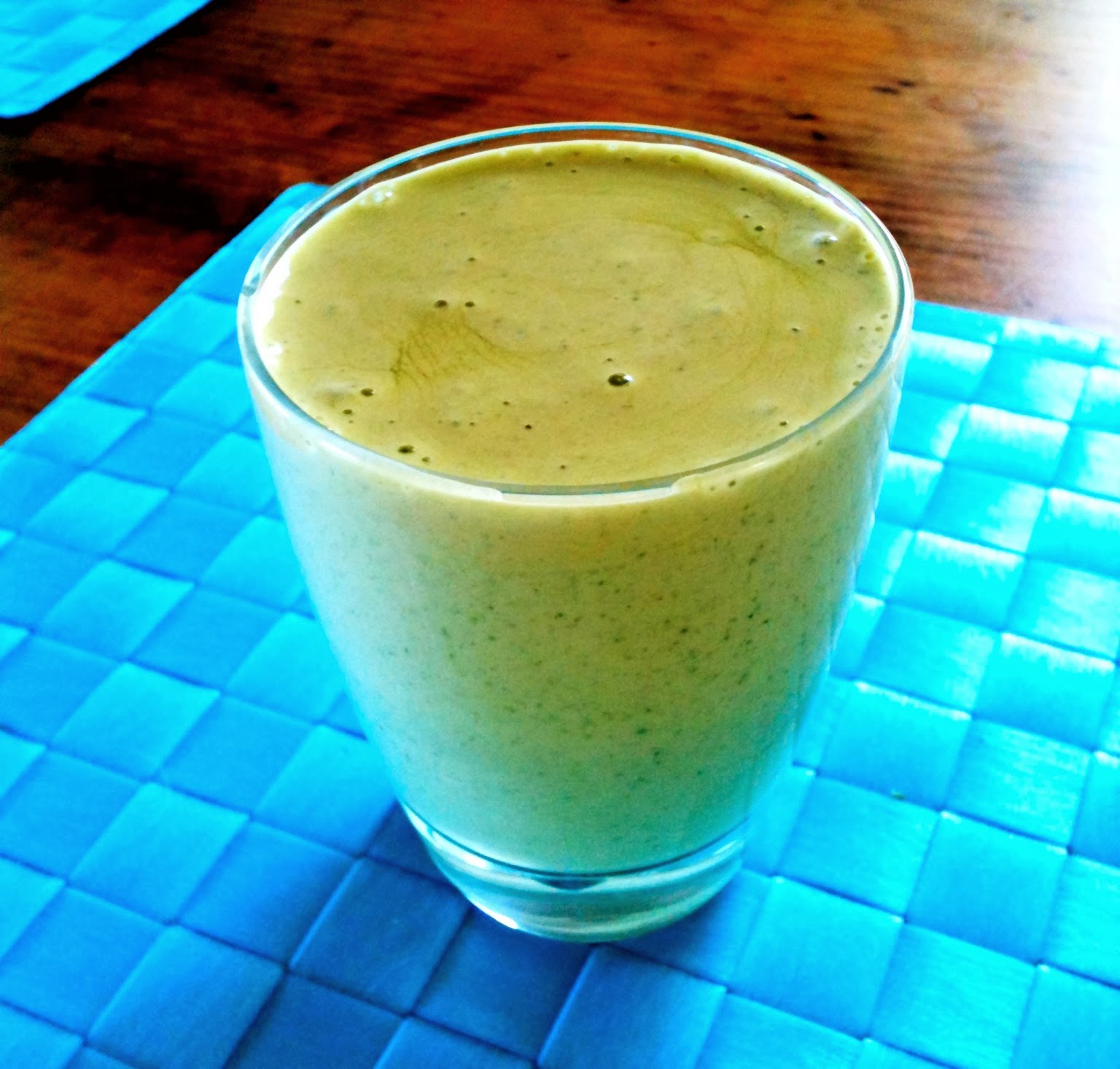 What’s your favourite green juice recipe? Don’t have one? Are you really serious about your health?

It seems like juices and smoothies are all the rage, especially green ones. You’re no-one unless you’re instagramming a glass of bright green something. So are these drinks really the key to glowing good health?

Juice from fruits and vegetables contains a range of nutrients, vitamins, minerals and phytonutrients – just like the whole fruit and veges do. What juice doesn’t typically contain is the fibre that comes in whole fruit. It’s this fibre that helps keep us feeling full, keeps us regular and feeds the good bacteria in our guts. When you make juice all that fibre is filtered off with the pulp, and often thrown away. A smarter idea is to save it and use it in baking – add to your favourite loaf or muffin recipes, for example.

Fruit juice – even home-made juice – can also pack a lot of sugar. Yes, it’s natural sugar, but it comes concentrated – again, without the moderating effect of fibre that you get in whole fruit. It’s far easier to drink the juice of four apples than it is to eat four apples, and the former won’t make you feel full the way the latter will. Fruit and vege blends – or just veges on their own – are a good way to cut the sugar in any juice you make. But don’t think you’re getting a serve of veges when you have a vege juice, and especially don’t make it the only way you get veges. Count it as extra to the five or more whole vegetables and fruit you’re eating.

Smoothies are a slightly different story. In a smoothie you retain the fibre from the veges and fruit; everything is crushed up together. When you make a smoothie you also have the opportunity to add extras for extra nutrition, like milk, yoghurt, nuts, oats, LSA, coconut, nut butter – the options are endless. A smoothie is a good way to get an extra serve of veges into your day. Keep in mind what a serving is: two handfuls of greens or one handful of other veges and fruit. And again don’t use a smoothie to get all your veges for the day. You still need veges you can chew.

Be wary of commercially available ‘smoothies’. These can be nothing more than different kinds of concentrated fruit juices and purees in an apple juice base – not what you would use if you were making the smoothie yourself, and probably with less fibre. Some contain 8 or 9 teaspoons of sugar per bottle.

So what makes for the perfect smoothie? It’s down to personal taste. Hardcore green smoothie makers don’t include any fruit, just handfuls of greens. I prefer to eat my greens sautéed with garlic and olive oil, so that’s not for me. I do like a mixed combo of kale or silverbeet, cucumber, ginger, banana and pineapple. It looks and tastes delicious, and is great for you, too.
Posted by Niki Bezzant at 6:19 PM No comments: